Skip to content
Health
China posted a steep jump in daily COVID-19 infections on Tuesday, with new cases more than doubling from a day earlier to hit a two-year high, raising concerns about the rising economic costs of the country’s tough containment measures.

A total of 3,507 domestically transmitted cases with confirmed symptoms were reported on Monday across more than a dozen provinces and municipalities, up from 1,337 a day earlier, the National Health Commission said. Most of the new cases were in the northeastern province of Jilin.

Though China’s case load is still tiny by global standards, health experts said the rate of increase in daily infections over the next few weeks will be a crucial factor in determining whether its tough “dynamic clearance” approach – aiming to contain each outbreak as soon as it arises – is still effective against the rapidly spreading Omicron variant.

A COVID-19 forecasting system run by Lanzhou University in China’s northwest predicted that the current round of infections would eventually be brought under control in early April after an accumulated total of around 35,000 cases.

The university said in its latest assessment published on Monday that while the latest outbreak was the most serious on the mainland since Wuhan in 2020, China could bring it under control as long as stringent curbs remained in place.

“Now we have two of the wealthiest Chinese cities, Shanghai and Shenzhen, both under lockdown: how is that going to affect the Chinese economy?” he said. 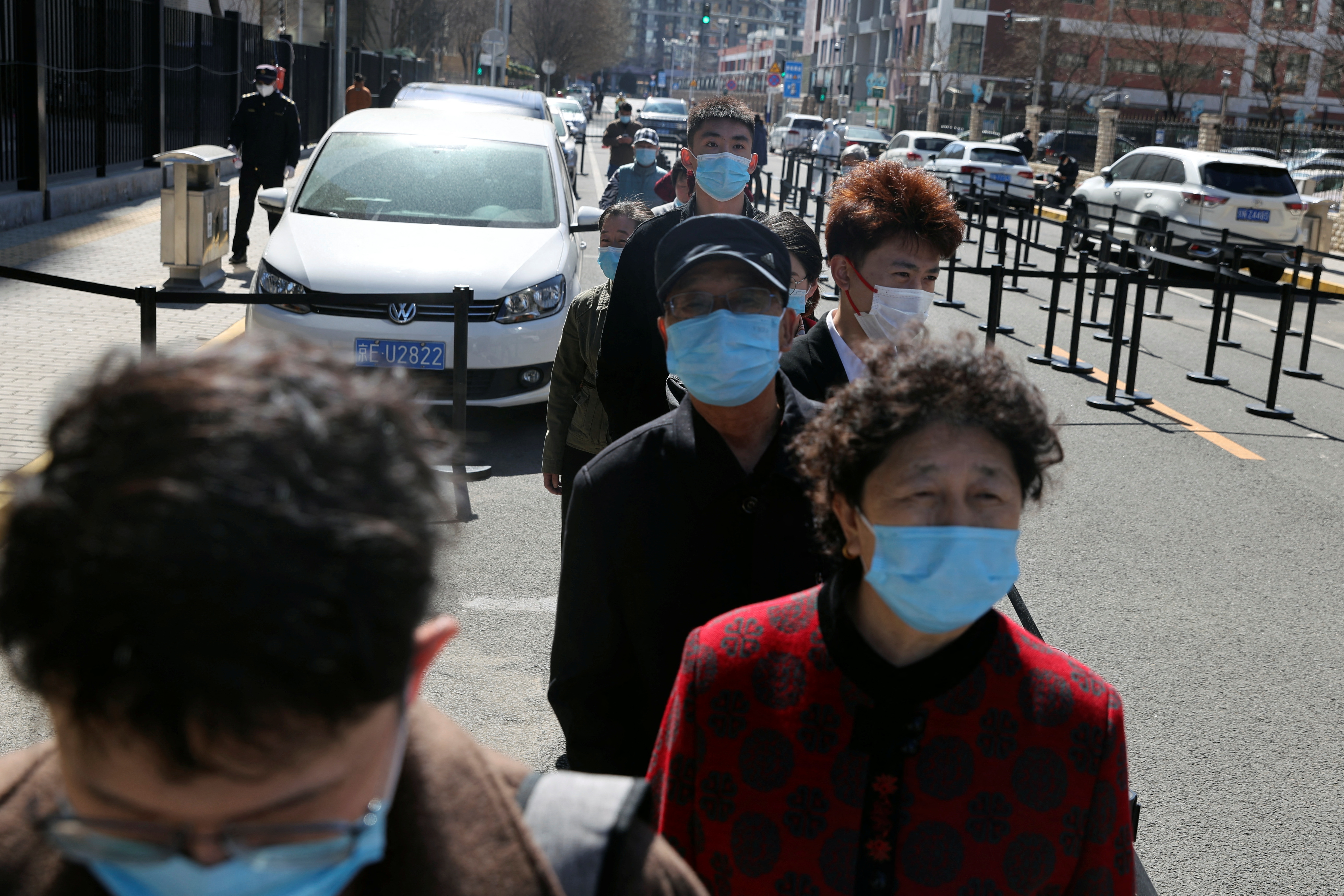 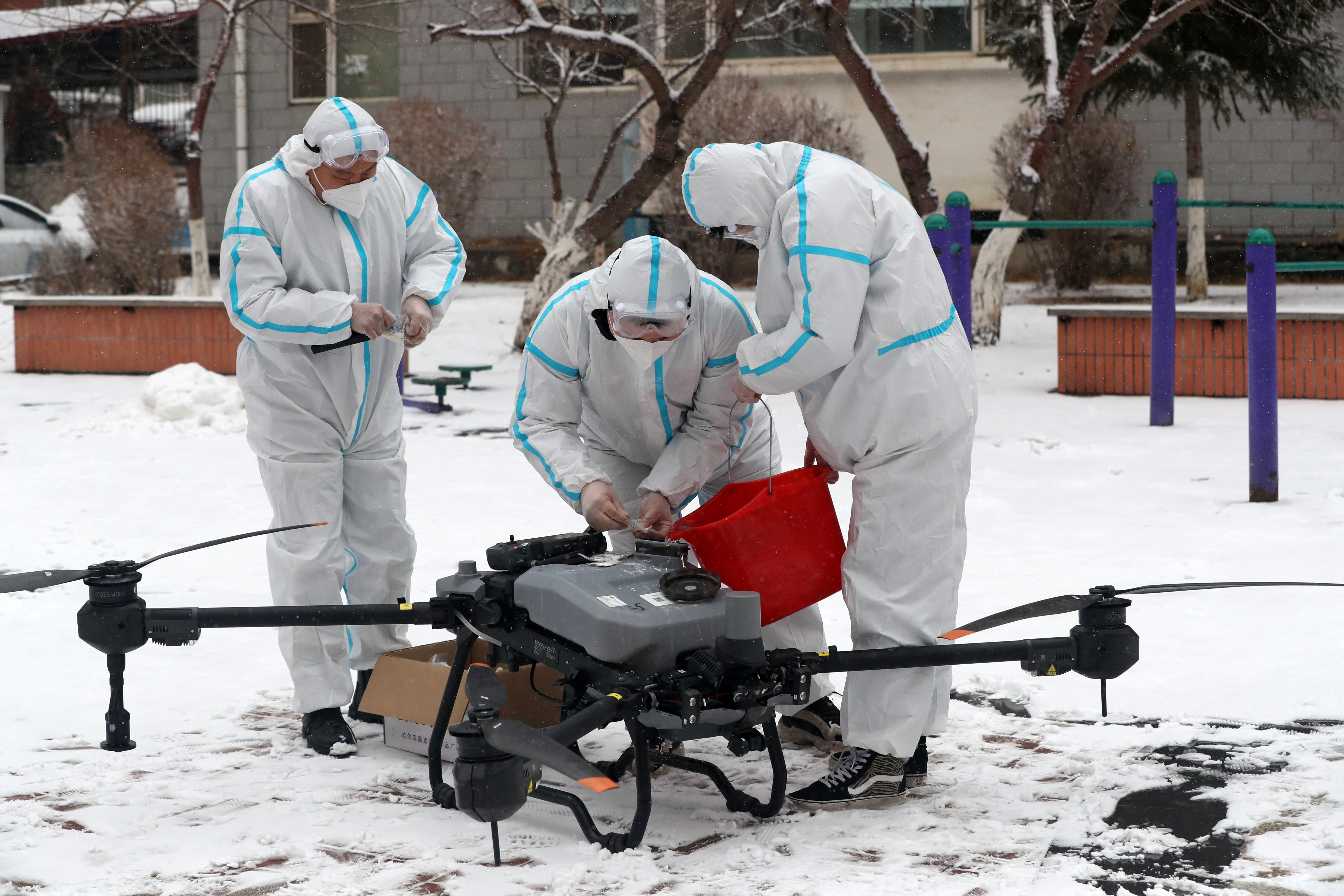 Workers in protective suits prepare a drone amid the snow to disinfect a residential compound under lockdown, following the coronavirus disease (COVID-19) outbreak in Changchun, Jilin province, China March 14, 2022. Picture taken March 14, 2022. China Daily via REUTERS ATTENTION EDITORS – THIS IMAGE WAS PROVIDED BY A THIRD PARTY. CHINA OUT.

Though confirmed symptomatic infections in Shanghai stood at 21 on Monday, with an additional 130 asymptomatic cases, authorities were taking no chances, cordoning off individual apartment buildings and testing residents.

China’s aviation regulator said that 106 international flights scheduled to arrive in Shanghai will be diverted to other domestic cities from March 21 to May 1 due to COVID.

In Shenzhen, there were 39 confirmed infections with 21 asymptomatic cases. The government is describing the week of controls aimed at containing the outbreak as a period of “slow living”, with public transport, marriage and funeral services all suspended, and some residents forced to undergo daily tests.

Nearly 90% of the mainland’s confirmed new symptomatic cases on Monday were found in the northeastern province of Jilin, which has banned its 24.1 million population from traveling in and out of the province and across different areas within the province without notifying local police. read more

Jilin officials should step up the preparation of temporary hospitals and designated hospitals and make use of idle venues to ensure all infections and their close contacts are isolated, a local Communist Party authority-backed paper said, citing the provincial head of the Party.

The number of new asymptomatic cases, which China does not classify as confirmed cases, stood at 1,768 compared with 906 a day earlier.

There were no new deaths, leaving the death toll unchanged at 4,636.

As of March 14, mainland China had reported 120,504 cases with confirmed symptoms, including both local ones and those arriving from outside the mainland.